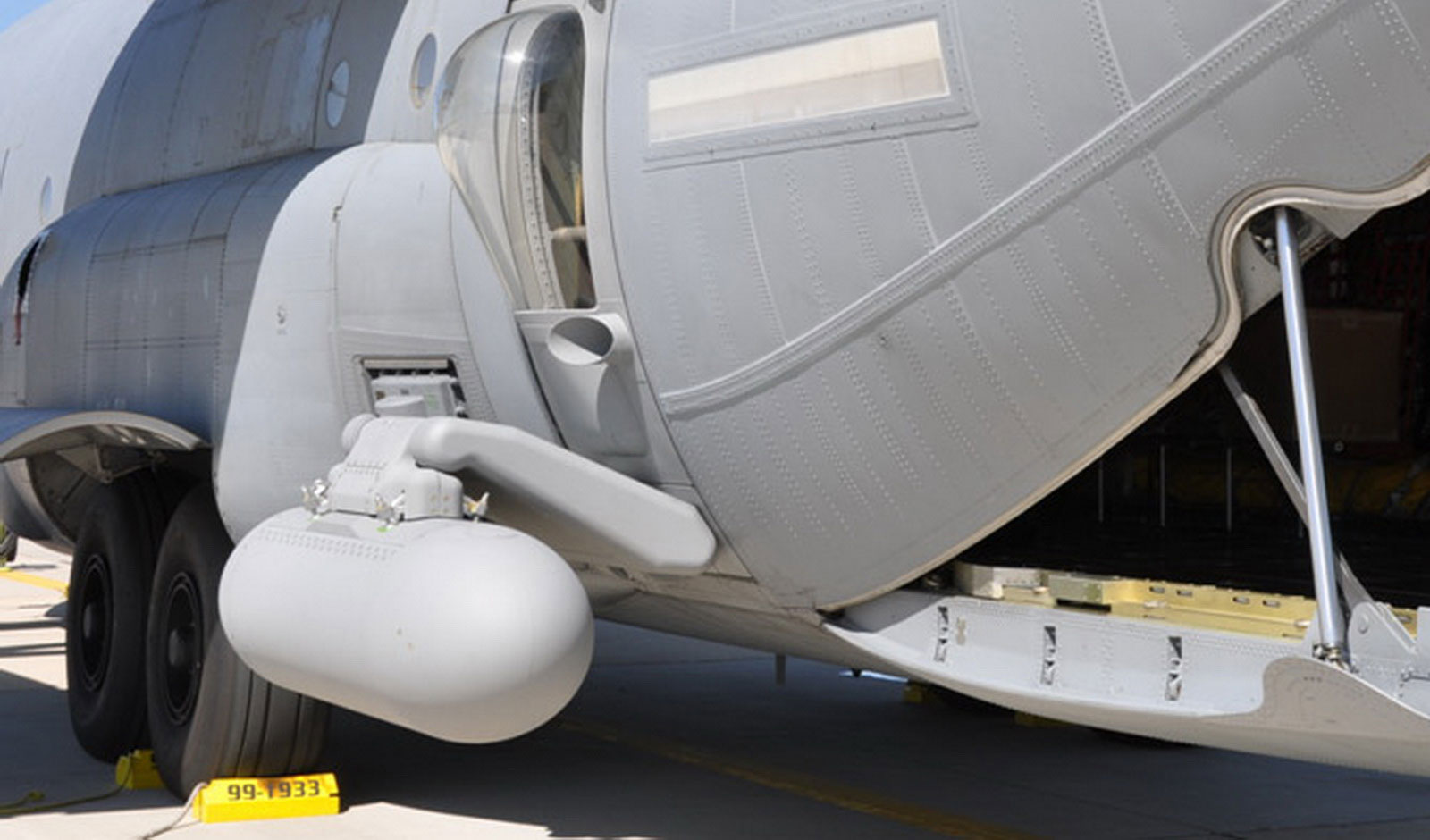 What this project did (that is related to this post) is prove that a payload pod could be carried on a door mounted arm or stub wing. The benefit of using the paratrooper door is that if the aircraft is unlikely to be recreating the Arnhem landings then the door is somewhat surplus to requirements and represents a decent attachment point because it negates the need for complex airframe integration and can be easily swapped in and out as needs dictate.

It is an ingenious solution. The company responsible for the design and manufacture of the door kit is called Airdyne Aerospace of Canada and the USA with their marketing partner HISS.

Their main product is called SABIR, Special Airborne Mission Installation and Response and has been continually improved since the initial work on the crevasse radar.

SABIR has a number of components, mounting solutions, integral operator seats, workstations, tube ejectors and the pods themselves.

This allows the user to mix and match depending on requirements and because there is no airframe modification they can be tested/integrated off board at a low cost.

Various workstations, observer/operator seats and equipment racks can be fitted to the pallet.

The pods themselves are attached to the swing arm with it being raised for take-off and landing and lowered when airborne.

Airdyne have a good description for the pods multiple SABIR systems can be deployed on the same aircraft to maximize sensor variety or ability to observe multiple locations.

Skip forward a few years and we have Harvest Hawk, Vigilant Watch and Vigilant Stare, all variations on the SABIR/SAMPSON theme.

Harvest Hawk is a sensible programme driven by the USMC, started in 2008/9, that seeks to squeeze maximum benefit from a common platform, using roll on roll off kits  including podded sensors and weapons that extends the capability of the C130 tanker to include gunship and surveillance.

Defence Industry Daily has maintained a very comprehensive page on the US Marines Harvest Hawk, click here, well worth a read, plenty of great information and images.

One of the key features of the recent Harvest Hawk upgrade is the Derringer Door which is in simple terms a pressurised launch tube for the Raytheon Griffin and MBDA Viper Strike missiles mounted on a modified paratrooper door, the racks in the image are for storage. In its initial guise, the Harvest hawk used a ramp mounted launch rack but this required time consuming de-pressurisation.

The Derringer Door allows the weapons to be launched from a higher altitude, both keeping the aircraft out of the automatic weapon threat zone and allowing a larger area to be covered.

Harvest Hawk also uses a pod mounted sensor package with the original refelling pod on one wing and the sensor pod on the other, both occupying the inboard pylon. Hellfire launch racks were also fitted to the outboard pylon location and the fire control system is a straight lift from the AH-1Z Cobra gunship parts bin.

There have been plans to mount an automatic weapon into the door mechanism as well, the ATK 30mm Bushmaster which has recently been type certified.

The original mission Harvest hawk mission kit cost the grand sum of $22m and other sources cite a figure as low as $10m, which for what it delivers I think is pretty damned cheap.

They even have a sonobuoys ejector tube version.

What strikes me most about this is that the sub systems are entirely off the shelf, weapons, sensors, fire control systems and ejector racks are all from the parts bin. Combining them with a bit of clever engineering and ingenuity has created a seriously cost effective ‘whole’.

It is also clear that should we choose the A400M to do similar, at least conceptually, the same mounting options are viable even if the A400M paratrooper door is physically different and integrated with the undercarriage fairing.